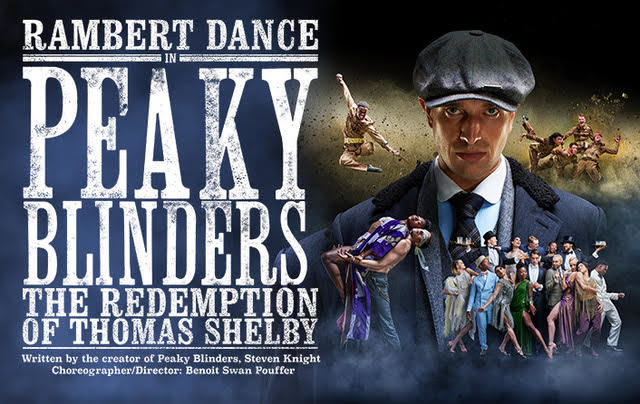 ...You young men of the Tunnelling brigade, you are all dead. Not counted among the dead because your bodies were not buried with the dead. But dead inside...

A new dance theatre event, delving into the story of Tommy Shelby and the Peaky Blinders, written by the creator of the global hit television series.

Dazzling, athletic dance and stunning dramatisation, with an iconic eclectic Peaky soundtrack, and a live on-stage band.
‍
Tommy and the Peakys fought together at Flanders and the show opens in the trenches. Bound by this experience, a really personal story unfolds as the Shelby family navigate the decisions that determine their fate and Tommy is intoxicated by the mysterious Grace.“…an independent dance company, dedicated to bringing ballet to the people.” Tommy Shelby, S4 Ep5

A Rambert production in association with Birmingham Hippodrome. Co-produced with The Lowry.

Dates
12 October - 6 November
Venue
Troubadour Wembley Park Theatre
Running Time
2 hours including interval
Tickets From
£19.50
Age Recommendation
15+
Warnings
Age recommendation is 15 and above. This show is based on the TV series and there will be some representation of violence, sex, rape, miscarriage, and drug use. There will be strobe lighting, live gunshots and pyrotechnics on stage. There will be some (recorded) loud bangs

A short walk from Wembley Park station which is just 12 minutes from Baker Street, Troubadour Wembley Park Theatre is located in the heart of Wembley Park.

How To Get There

Wembley Park station is a short, five minute walk from the theatre, and the most convenient way to reach us. With connections to the Jubilee and Metropolitan lines, Wembley Park is just 12 minutes from Baker Street, and easily accessible from Central London and stations to Amersham, Chesham, Stanmore, Uxbridge and Watford.

Wembley Stadium station is approximately 15 minutes walk from the theatre, and situated on the Chiltern Railways line between London Marylebone and Aylesbury.

Wembley Central station is approximately 25 minutes walk or a short bus ride from the theatre, and conveniently situated on the Bakerloo line and London Overground, offering journeys to Harrow & Wealdstone and Watford Junction to the north, and Elephant & Castle and London Euston to the south. London Northwestern Railway also provide a limited service between London Euston and Northampton.

Please note that there is no public parking on site at Troubadour Wembley Park Theatre. We are located five minutes walk from Wembley Park Underground station and strongly recommend you travel to and from the theatre using public transport. To plan your journey please visit Transport for London.

If you do plan to drive, please plan your journey in advance and leave plenty of time in case of delays on the roads. Wembley Park is also home to Wembley Stadium and the OVO Arena, and the local area will be extremely busy on event days. For a full listing of local event's taking place, including events at Wembely Stadium and the OVO Arena, please visit Wembley Park's What's On page.

Wembley Park's Red and Pink car parks are both a short walk from the theatre. For more information on these car parks and their standard tariffs please visit Wembley Official Parking. Please note that neither of these car parks are owned or managed by Troubadour Theatres. Whilst we endeavour to provide accurate information we cannot guarantee opening times, prices or availability of spaces so please check directly with the car park before commencing your journey.

We strongly advise to visit us using public transport, and always check the OVO Arena and Wembley Stadium events in advance if you are planning to drive.

The following bus routes all have stops within a 10 minute walk of Troubadour Wembley Park Theatre:

Only bring one small bag that can be stored under your seat, as our cloakrooms are not currently available.

If you leave the auditorium during the performance to use the toilet, bar, or for any other reason you may have to wait until a suitable break in the performance before being able to re-enter. This may be the interval.

The safety and security of our guests, performers and staff is always our top priority, and as such all bags will be checked on your way into the theatre. In order to speed up your entry process, please refrain from bringing large bags or suitcases

Yes. It opens 45 minutes prior to the performance start time, serving a wide range of soft and alcoholic drinks, including a number of locally sourced items. A selection of light snacks are also available from the bar.

In order to help us serve you as quickly as possible, all of our sales points accept card payments only.

We do not have an on-site car park at Troubadour Wembley Park Theatre. We are situated five minutes walk from Wembley Park underground station and we strongly recommend you to travel to the theatre using public transport.

If you plan to visit us by car, Wembley Park's Red car parks is a short walk away from the theatre. Please note that we do not manage this car park.

Wembley Stadium and the SSE Arena are both very close to the theatre. On event days, parking space is extremely limited and prices can increase. Plan your journey in advance, contacting the car park if necessary before travelling.

Troubadour Wembley Park Theatre is a fully accessible venue. There is level access from the street, into the foyer, and the ground-level section of the auditorium. There are two fully accessible toilet cubicles. We want to ensure your visit to our theatre is as smooth and enjoyable as possible.

If there is anything that we can do to assist you in your visit, please email our dedicated team at access@kxtickets.com.

Assistance dogs are allowed in the auditorium. Alternatively, our staff are happy to dog sit during your performance.

Yes, the bar and auditorium have a loop system. If you require a headset please speak to a member of staff when you arrive who can help with your request.